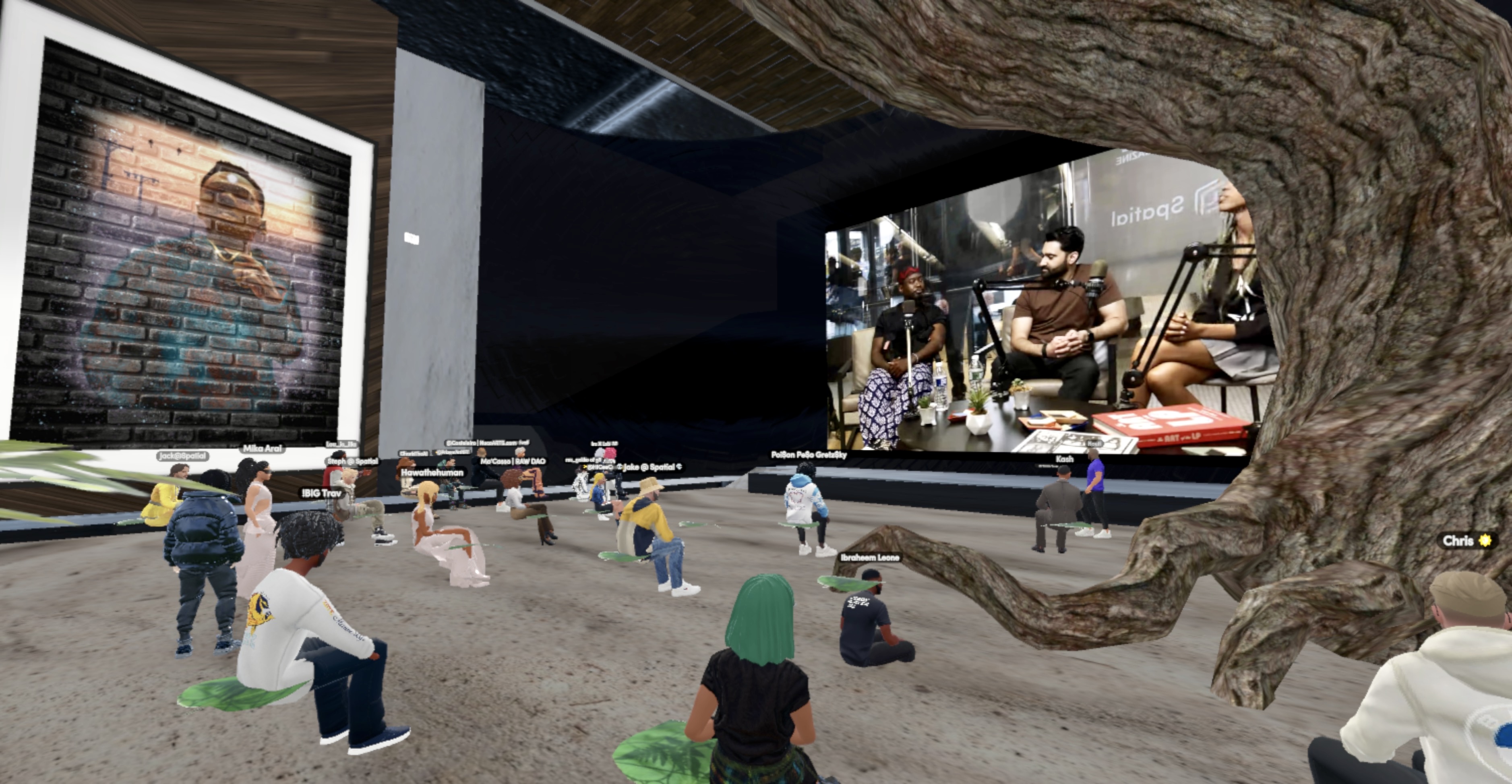 What is the Next Big Social Media Platform? How Virtual Reality Can Revolutionize Social Media

As a historically XR first company, the team at Spatial is excited about the future of virtual reality in new social media platforms. It is important to us that community has the ability to join as immersively as they would like or are able. We have seen the power of VR for having meetings, gathering, and we know that it can do so much for social interaction. While you can feel connection joined on web or mobile, virtual reality yields a heightened sense of presence with those who may be on opposite ends of the Earth.

We have launched a range of new social features in Spatial. Our community can now follow each other, build worlds together in social VR, create galleries, host concerts, display messages, put on fashion shows, and more. We’re pioneering this idea of an immersive social platform where you can truly interact and connect in real-time not only in VR but also web and mobile. Immersive technology is a huge part of the next iteration of social media and making it less about the observation of others and more about connecting with people. Stay tuned and connect with us for updates and information about future releases involving VR/AR on our platform!

The rise of virtual reality has been a surprise to many. What was once a niche technology used for gaming and certain types of training is now in more homes and being experienced by more people than ever before!

While VR is making moves in entertainment and specific training applications, the future of virtual reality in social media has proved to be quite interesting. Social experimentation with VR is becoming increasingly popular, and many of them are producing positive results.

Social media VR certainly has its place in the future as massive companies like Facebook invest heavily in virtual reality and augmented reality development. Plenty of research has gone into demonstrating the potential of VR for social media over the years. In fact, the roots of Spatial started in Augmented and Mixed Reality back in 2016.

But what can VR do for new social media platforms? What will the combination of social media and virtual reality look like? What are some of the ways people will use social VR?

The Potential of VR in New Social Media Platforms

Who would have thought social media would come this far when the first platforms were created back in the 2000s. The experiences were much simpler and most people didn’t even bother setting up an account. Fast forward 20+ years to the  2020s and you can see how social media platforms play an important role in social and professional lives.

Much of the growth of social media has come down to the ways platforms have evolved over the years. They’ve simplified how to create and share content while also developing new ways for people to connect with each other. For many, new social media platforms using VR will be the next step in this evolution.

Let’s look at a few of the reasons why VR has a big future in new social media apps:

Whether for gaming or a new social media app, one advantage of the technology is that it offers a more immersive experience. When social networks first came online, it was mostly text interactions and some limited features for images. When social networks added video capabilities, it was a big development for engagement. New social media platforms using VR will offer more immersive and engaging social experiences for people. In many cases, it will be like having an in-person social experience.

Social media already relies on interaction, but VR could enhance the interactive element and take it to new levels. With VR, you can do more than just like and comment on the posts of people in your network – you can interact in a way that is more like real life. You can share a virtual space and have a conversation or go explore social experiences created by others. New social media apps with VR will offer a vast array of opportunities to participate and interact. You can watch movies together, attend concerts, tap into fashion shows, and more in VR.

It often feels like there is a barrier to authenticity in the constructs of social media platforms. It is difficult to have what feels like an authentic interaction when you are just sharing text comments and pictures. The use of VR in new social media platforms will help to overcome this barrier. When two or more people share a virtual space with realistic avatars and audio, they can have interactions that are more like the ones people have when they see each other in person. VR opens up the ability to truly connect in real-time. When it is done right, VR can be a means to create social experiences that feel more authentic.

VR can facilitate a range of media options. Obviously, you have the VR experience, but you can add layers of media to that experience. A VR social network could allow users to create rooms that have images hanging on the walls or videos playing on a screen. You could play music or share 360 photos. People could even create short VR films to share with their friends and followers. With social VR, it is not just a range of new media options but the ability to do more with things like video, images, and audio.

What New Social Media Platforms Will Look Like with VR

As you can see, VR has a lot of potential to enhance social media experiences. However, what is it going to look like in practice? How will people use VR in social media?

When you meet someone on social media, it isn’t really like meeting people in real life. You can share information and maybe have a video chat, but it is not like meeting face-to-face. VR can facilitate this type of meeting. New social media apps could create spaces for people to meet each other. It could be a virtual park or some other type of hangout environment such as Spatial. People could meet, have conversations and make new friends in a way that is more immersive, interactive, and authentic.

New social media platforms will also offer new ways for you to share and experience content thanks to VR. You could share immersive 3D films or 360 videos from your vacation. People can create custom experiences for their friends and family. When you go to someone’s page, it might be more like a room you can actually enter. You could see and like their posts in one area of the room, look somewhere else and see a media center with videos and pictures and then go to another area to send messages to the person.

The future of virtual reality could also be great for a range of social events. You could get friends together for a movie night in a VR theater or watch the big game from a virtual viewing room. You could even have VR parties with all of your friends from around the world. Brands and social networks could even create larger events like virtual conventions to connect with and build relationships with consumers.

With the launch of Spatial Profiles, Spatial claimed stake in its hypothesis that the metaverse will usher in the next era of social media. You can jump in now to set up your Spatial profile, follow others, and likewise share your journey with your virtual friends. Being a Spatian has never been more rewarding, and it's only getting better from here. Join the party!

10 Examples of NFTs You Can Collect and Invest In

What Is Web3 and How Does It Impact The World as We Know It?